Before and after an oesophagectomy:

Patients vary in their build, and may have shorter or longer chests and stomachs. The blood supply to the re-positioned stomach can be reduced which can result in a narrowed join.

The stomach is raised into the chest and joined to the upper part of the remainder of the oesophagus. It is shaped like a tube (about 5 – 6cms wide) to help it to empty better. Because the stomach is so much smaller, it is common to feel full much earlier after eating than before.

The pylorus sphincter valve at the base of the stomach is normally controlled by the vagus nerve. This nerve is divided as an inevitable part of an oesophagectomy and the pylorus may not work so well a) in allowing the stomach to empty, and b) in preventing bile from entering the stomach. Some surgeons undertake a pyloric myotomy (cutting the muscles to increase its capacity) as part of the main surgery; others prefer to wait and see if a problem develops, and then treat it by stretching it with an endoscope. 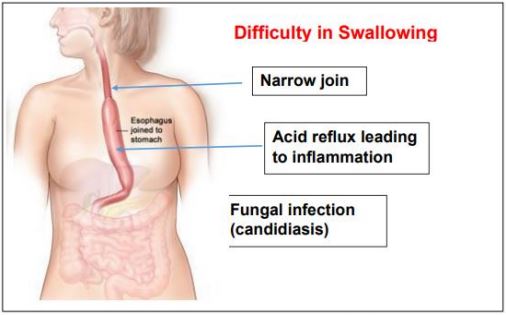 Treatment options can be:

Reflux is experienced by 40% - 60% of patients. Before surgery, downward pressure from the chest helps to keep the stomach contents in place. The removal of the valve between the oesophagus and the stomach also leads to more reflux being suffered.

Reflux can sometimes be bile (alkali), rather than acid. Impedence monitoring can be done to assess whether bile exists. Agents such as Cholestyramine can help with the problem. A surgical procedure called Roux-en-Y is standard for gastrectomy cases to divert bile further down into the digestive tract.

No liquid with meals
Decrease sugars
Lie down after eating

At the very last resort – Surgery

Some food, like bread, tends to stick in the plughole when you are doing the washing up; other food runs through the drain quickly – perhaps our digestion system is the same. Toast can be better than bread. Avoid sugar, jam, and icing sugar. Rice can fill the stomach up quite quickly.

If you do risk a piece of sweet cake, try having something with low glycaemic index with it (eg half a banana)?

Flatulence may be affected by changes in bacteria created by the changes in the digestive system after the surgery. The degree to which individuals swallow air whilst eating may also be relevant.

Creon is a medication that can help with fatty, floating motions. Creon can help when pancreatic enzymes do not break down fat properly. The stomach normally produces hormones to stimulate pancreatic function. If they have been reduced by gastric surgery the pancreas may not produce enough. Patients may then benefit from supplementation by preparations such as Creon.

Loperamide can help against diarrhoea. Codeine might also help but be cautious because of the long-term effects of codeine because it is opium-based.

Normally, the digestion process sucks water into the digestive system. Dumping after a gastrectomy is the result of the rapid transfer of large amounts of food into the small bowel which is normally delayed and controlled by the stomach. This results in a larger fluid shift into the bowel than normal and can cause bloating and fatigue after meals.