Fundraising in the sun! 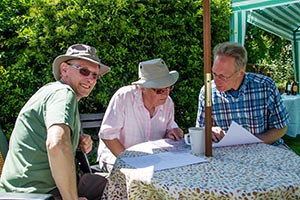 Chris and Rob Turner from West Bridgford, Nottingham held a coffee morning on 17th May to raise funds for the OPA, using the new downloadable pack from the OPA website.

Here's what they had to say:

In February we offered to hold a coffee morning and try out the fundraising pack which the OPA had just put online. Rob had had surgery in April of last year and by then was almost back to full health and ready to do something to help others affected by oesophageal cancer.

We started, first of all, by listing friends, family and neighbours we wanted to invite. We decided on a date and time and printed the invitations, adapting them slightly to suit our needs. We also decided to have the event running into the afternoon to allow as many people as possible to join us.

This was closely followed by us making a list of all the local shops and stores who we thought might help out by donating raffle prizes. After finding out the names of store managers, letters were written explaining who we were and what we were doing. We then took these personally to local shops and restaurants which gave us the chance to answer any questions and to explain further how the OPA would benefit from the money raised. 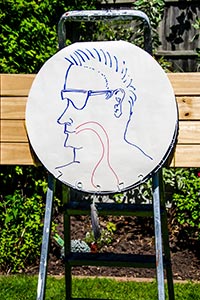 We then started to think about practicalities; would we have enough garden chairs (we held the event outdoors and luckily the weather was perfect), enough tables, enough cups? After knocking on a few more doors we managed to borrow tables, chairs and a large gazebo as well as mugs and plates from the local church. We even borrowed a small tea urn from our local OPA group to ensure we always had boiling water on tap!Raffle prizes and offers of help soon started to pour in. We were amazed at how generous people could be. Almost everyone, from close friends and family to neighbours, shopkeepers and restaurant managers helped out by donating either time, money or goods.

As the big day arrived we looked at what we had got. Twenty nine raffle prizes needed to be placed in some sort of prize order, quiz sheets needed to be prepared and the darts game (three darts in the oesophagus of a torso drawn on thick lining paper and secured to a dart board!) needed assembling. A midday meal was made for all those helping out for the full four and a half hours (10.30 – 3pm) and last minute shopping was bought. And we were all set! 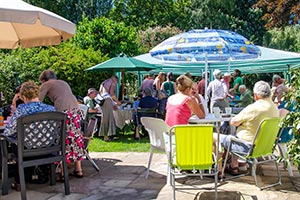 The day of the coffee morning arrived and, for us at least, it was a very early start. Once again, we were amazed at the generosity of everyone. We had around 70 people attend over four and half hours and it was lovely seeing people all chatting together and making new friends.

At the end of the day we counted up the money and found we had made well over £600, which far exceeded all our expectations.

A big "Thank you" to all those who helped out, especially Jillian and Maurice Chatfield, our new friends from our local OPA group, who slaved tirelessly in the kitchen; and those who joined us for coffee, bought raffle tickets or made donations – we couldn't have done it without you!